Fences are being built with abandon.
One was not enough, nor a second, a third even bigger one is being built as we speak.
Fences are being built around the fences.
And then new fences, around the fences, built around the fences.
Or maybe its the other way around, and fences are being built inside the fences.
To protect us from the fence we built. Or to protect us from the fence protecting us from the fence protecting us.
I know it sounds complicated. I also know, it is much simpler than it sounds.
The outside world is being locked out, and the inside world is being locked in.
The only problem is, deciding which side of the fence you actually are, is not so easy.
With three fences running around each other you might easily find yourself on no man’s land.
And of course three fences are not enough.
There is a fourth one being built.
This one is being built out of words.
Language is being changed. It is turned into a fence. Words can cut like razor wire. Words can be put up on billboards, words can be repeated and twisted until they start meaning the opposite of their original meaning.
Migrant. Migrant free zone. Repeat this a thousand times, repeat this a million times, and it wont mean a human being, it won’t mean a refugee.
But of course. They are not like us. They are different. A barbarian horde. We are not talking about humans anymore.
Just repeat this again and again and again.
After a while it would not even sound like speech any more.
It will be just a sort of howling, barking.
That’s how fear sounds. Or anger.
Meaning is lost, and once it is gone, there is hardly a way to get it back.
Once language is altered, we won’t be able to talk to each other.
The fence we built around us and around the world will cut us off from reality for good.
We won’t even be able to notice this anymore.
Then we will be secure in our knowledge of being secure. 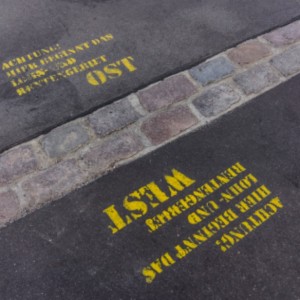